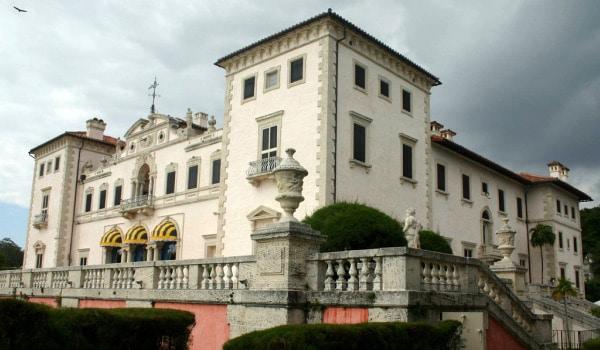 A wonderful view of how the elite lived in southern florida at the turn of the century. The museum is filled with wonderful antiques, furniture, tapestries, paintings and furnishings, however it may be too antiquey for those with modern tastes. The gardens are spectacular and the highlight of this attraction. Be sure to visit on a day that will allow you to spend time outside so you stroll around at your own pace and enjoy the gardens.

Visitors and residents in the Miami area are sure to want to take at least one trip to Vizcaya Museum & Gardens. This National Historic Landmark is also an accredited member of the American Association of Museums. Open to the public 364 days each year this beautiful retreat is something absolutely remarkable and a wonderful stop for all.

Originally Vizcaya was home to American industrialist James Deering and his staff. Deering used the home during the winter months from 1916 to 1925 when he died. When the home was constructed it was based on homes throughout Europe that caught the eye of Deering and Paul Chalfin, a painter. These components were carefully documented and then incorporated into the home’s final design, making it truly unique and loaded with a number of cultural influences. From the exterior the home looks like an Italian estate, by design, that had been standing in Florida for more than 400 years.

Most of the home is open to the public with 34 decorated rooms filled with antique furniture and art objects from the 15th through the 19th century. From the exterior the home appears to be two stories high but through some very clever architecture there is actually a level between the main public rooms and the upper bedrooms with 12 rooms for servants. The rooms on this secret level aren’t currently open to the public but they’re currently being renovated and will be opened to the public eventually. This exciting new step will not only give visitors a better look at how this floor functioned to serve the homeowners but it will also provide deeper insight into the servant’s lives.

The house is incredibly interesting and beautiful but it’s the stunning gardens that really wow visitors. Vizcaya’s expansive gardens combine Renaissance Italian and French designs that were meticulously planned by Chalfin and Colombian landscape architect Diego Suarez. The original design process took seven years to complete and future emphasis is going to be placed on interpreting and presenting the gardens as they were originally intended. The gardens feature outdoor rooms with key features of interest including fountains, a central pool, elevated islands, a mound with a small house or “casino”, statuary and themes throughout.

After Deering’s death in 1925 a skeleton staff remained but the following year a hurricaine devastated the region and caused great damage to the home and its beautiful gardens. The heirs wanted to keep the vision alive and brought Chalfin back to oversee the restorations from 1933 to 1934. Some family members tried to turn the house into an attraction but a hurricane again struck in 1935 and they gave up. Most of the land was sold for development and the formal gardens and house was given to Dade County for a VERY reasonable sum. It was announced that the county planned to use the estate as a museum and the family agreed to donate the furnishings as long as the estate continued to be a museum.

Because of the storied history of Vizcaya and its temporary time in limbo the collections are pretty eclectic. The original designers and patron were not set on a specific period or even country so the beginning collection and the architecture and the gardens are a bit of a hodge podge of ideas and elements that come together in an extraordinary way. The addition of new collections span more than 2000 years and reach from North America, to Europe to Asia. The collections are so broad and vast and the grounds so spectacular that you’ll swear you are at a museum or a countryside manor in Europe. And don’t forget to explore the latest addition to the collection, the David A. Klein Orchidarium and its heady display of beautiful orchids.

If you’d like a detailed tour of Vizcaya’s main house you can join one of the Vizcaya Volunteer Guides as they take you through the grounds and offer you detailed information that isn’t available in any other format. There are about 100 active guides and the tours are offered in six different languages. Each tour lasts about 45 minutes and different language tours typically have set schedules so it’s a good idea to check in advance before arriving.

Throughout the year Vizcaya hosts a number of activities and events, some of them are open to the public and some are private. The more popular events include the Moonlight Garden Tours, Film Series, Evening Talks and Special Tours, Performance and Contemporary Arts Projects.

The Moonlight Garden Tours typically occur twice or sometimes three times each month. Take this rare opportunity to wander through the gardens and along Biscayne Bay under the moonlight, entertained by informal concerns, live music and light refreshments. The Vizcaya Volunteer Guides are on hand to answer your questions and lead some tours in the gardens.

The Film Series: Viewing Vizcaya is a throwback to the days when Mr. Deering lived in the home and entertained guests frequently. Films are shown in the main courtyard and movie selections range from classic and historical films to modern hits. If a silent movie is the choice of the night, live music will be supplied to enhance your viewing pleasure.

Both the performances and the evening talks and special tours look to enlighten visitors on different topics and art forms. Take advantage of these opportunities whenever possible and you’ll be glad you did. Education coupled with entertainment is always worth the price of admission.

The contemporary arts program reaches out to both local and national artists, giving them a chance to explore the grounds in a new way. Two artists each year are invited to surround themselves in everything that Vizcaya is and create artwork that is a reflection of that experience. They’re also asked to participate in public programs, demonstrations and discussions.

Vizcaya has long been an important part of life in the Miami-Dade County region with some of the world’s most noted people gracing its halls including Queen Elizabeth II, Pope John Paul II, President Ronald Reagan, King Juan Carlos I, Queen Sofia of Spain and many others. It has also served as the host for a number of major international events such as the Summit of the Americas, the signing of the Free Trade Agreement and other events. In addition, the grounds can be rented for your special event, what better place to host a wedding.