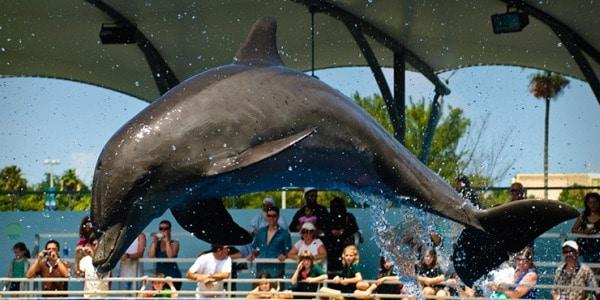 The Miami Seaquarium may look a little dated compared to other newer aquariums, but it does have that quaint old school charm. The dolphin and killer whale show are the highlights of the facility. The prices for admission and parking are a bit high, but you can find coupons or save money with a Go Miami Card. If you are visiting with children they really enjoy it and you should give the rating an extra star. Hours: Open Daily 9:30am-6pm

If you’re interested in learning more about some of the animals that live in and around Florida the Miami Seaquarium provides an excellent opportunity to not only observe and learn but to get up close and personal with some of their magnificent inhabitants. Located on 38 acres with spectacular skyline views of the surrounding city.

At its opening in 1955 the Miami Seaquarium was the largest marine life attraction in the world, it has since been surpassed but remains the longest operating oceanarium in the United States. The park has grown considerably and offers a variety of animal shows and presentations each day in addition to the exhibits, attractions, and a little bit of TV and movie trivia. Each area of the park and every exhibit is a delight and full of live entertainment as well as fascinating information and creatures that can be both adorable and creepy, depending on your view.

Fans of the old Flipper show may recall that 88 episodes of that show and two Flipper movies were filmed at the Miami Seaquarium. In honor of one of the show’s stars, a Miami Seaquarium resident, Bebe the Flipper Dolphin Show takes place on the original set for the Flipper television show and features Atlantic bottlenose dolphins just like Flipper. The shows are choreographed to music and feature jumps, spins, tail walks, flips and informative narration. There are audience participation segments so be prepared for some involvement.

The Top Deck Dolphin Show gives visitors another chance to see bottlenose dolphins perform acrobatics throughout the day. The splash zone gives you a closer look but you may end up wet. For a different view, watch the dolphins below the water from the special observation area.

Salty the Sea Lion is the clown of the aquatic performing set and the show is designed to take advantage of his nature and his strength. For a little added fun the harbor seal joins the fray.

If you loved the Golden Dome Sea Lion Show then make sure you stop at the Seal and Sea Lion Feeder Pool where you can observe the daily feeding sessions and even feel them yourself. In addition to the feeding there is a presentation on the California Sea Lion and Harbor Seal that is both entertaining and enlightening.

Here you’ll be introduced to a different kind of dolphin, the Pacific white-sided dolphin. In addition to physical stunts they’re extremely intelligent and the trainers know how to put them through their paces in both realms. In addition to the dolphins you’ll also get to see Lolita the Killer Whale perform her stunts. Little known fact, killer whales are actually a member of the dolphin family.

Back when the Miami Seaquarium first opened the Shark Channel was one of the most popular attractions, giving guests a chance to see sharks up close and yet safely. Today the Shark Channel presentation is still a favorite with trainers feeding the sharks and providing information on the various species that exist throughout the world.

The Main Reef Aquarium is a 750,000 gallon saltwater aquarium with a huge variety of fish living inside. During the Tropical Reef Presentation a diver works through the tank hand feeding the fish as a narrator provides further information about the critters in the tank.

The Manatee Presentation is an important part of Miami Seaquarium because not only is it an attractive exhibit where you can learn about Florida’s state marine mammal poolside and underwater, but this animal is federally endangered and its important that everyone learn what they can do to help protect this magnificent species.

Located in their natural habitat, a natural mangrove forest, you can look to spot sea turtles, alligators, Florida birds, fish and other wild life.

Don’t fall into the trap of believing everything at the Miami Seaquarium is from the water, the Tropical Wings exhibit lets you examine a variety of tropical birds, reptiles and other animals that normally live in a rainforest.

The Nile Crocodiles are the center of attention at Crocodile Flats. Located in Discovery Bay’s Upper Island this exhibit features 32 tons of rock, 72 tons of sand, coconut and sable palm trees and enough Nile Crocodiles that you’re guaranteed to see a few. These creatures can reach up to 16 feet with the largest one on record being larger than 20 feet.

One of the most popular activities at Miami Seaquarium is the Dolphin Interaction Program. This is one of the most exciting experiences you can have in your life and I highly recommend it, especially if you or your children have a special affinity for animals. On your Dolphin Odyssey you’ll learn more about dolphins in a classroom presentation before you dive into the water with them, so everyone knows what to expect from the experience. Once in the water you’ll get the chance to kiss, hug, dance with, rub and possibly even ride a dolphin across the pool. If you don’t quite fit the 52 inch requirement for the Dolphin Odyssey there is the Dolphin Encounter. It begins with another classroom session and is followed by a shallow water experience where guests can touch, feed and play with a dolphin. Children age five and up can participate and will have an experience they’ll remember fondly for the rest of their lives.

The times of shows does vary depending on the day so make sure to check with the admission desk when you arrive to schedule your day so you can see everything you want.